In the closing years of the 19th Century, visitors to the Waldorf Hotel in New York City found a new salad on the menu. Developed not by the chef de cuisine, but by the maître d’hôtel Oscar Tschirky, this new salad included lettuce, apples, celery and mayonnaise with walnuts and sometimes grapes being incorporated soon after. Some chefs would change and augment the ingredients a bit over the years, but the “Waldorf salad”, as it came to be known, is now an American culinary icon. Approximately 120 years after Tschirky’s creation, I began working on a warm lasagna version of the Waldorf salad. The recipe below is my contribution to this tradition. It can play the role of an appetizer for dinner or the main course at lunch. It is best served in the cooler months. 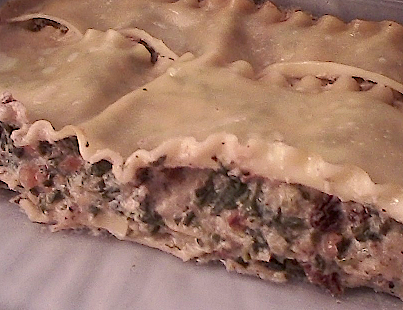 Heat your oven to 350 degrees Fahrenheit.

Cook the spinach according to the package directions. When finished, place the spinach in a colander to begin draining the spinach of water. Set aside.

Spread the walnuts on a baking sheet and toast them in the oven for 8-12 minutes, until they are brown and aromatic, but not burned. Set them aside to cool.

Turn your oven to 375 degrees Fahrenheit.

Using a mortar and pestle, grind the celery seeds for a minute or two until the seeds are open and fragrant. Place the kosher salt, chopped celery, ground celery seeds and a half stick (4 tablespoons) of the butter in a sturdy skillet. Saute over a medium flame until the celery is tender. Set aside to cool.

In a large mixing bowl, combine the applesauce, honey and lemon juice. Stir until incorporated. Add the raisins. Chop the cooled walnuts and add them to the bowl. Use the back of a spoon to press the spinach against the colander, wringing out any water that has not drained. You want the spinach to be as dry as possible. When finished, add the spinach to the mixing bowl. Add the ricotta, mozzarella and eggs and stir until thoroughly combined and all ingredients are distributed evenly.

Cook your lasagna according to the package directions and drain.

Tightly wrap the lasagna pan(s) in metal foil. Bake 35 minutes at 375 degrees Fahrenheit. Remove from the oven and allow the lasagna to sit, still wrapped in the metal foil, for at least 10 minutes before serving.