When I was developing this recipe, I thought I was creating a novelty cake appropriate only for festive occasions such as birthday parties. The result, however, was a mature, flavorful and versatile cake that is appropriate for many occasions. The cake incorporates the flavors found in a cherry Coke® (including 5 cups of Coca-Cola®), but it’s not overly sweet. This is a labor-intensive cake that takes a while to make. 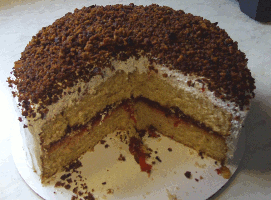 In the bowl of a stand mixer, combine the flour, baking powder, cinnamon, and nutmeg. Fit the stand mixer with the paddle attachment. Turn the mixer to the stir setting and allow these dry ingredients to stir for one minute. Turn off the mixer and use a spatula to scrape the bottom of the bowl, bringing unmixed ingredients to the top. Turn the mixer back to the stir setting and allow it to stir for an additional minute.

Slowly add the teaspoon of kosher salt to the Coca-Cola. (Be careful, the salt will cause the Coke to fizz.) Add the vanilla to the Coke and stir until the salt is dissolved. Pour the Coke mixture into the mixer’s bowl. Add the eggs and the sugar. Mix on low speed until combined then increase the mixer’s speed to medium and beat for 2 minutes.

Divide the batter between the pans and bake for approximately 29-31 minutes, until the center is firm and a toothpick inserted in the center comes out clean.

Allow the cakes to cool in their pans on a wire rack for 10 minutes then remove from the pan, turn right-side up and allow to cool to room temperature on the wire racks.

Begin by reducing the Coca-Cola. Put the .5 cup white sugar and the .5 teaspoon kosher salt into a medium-size heavy saucepan. Pour the Coke into the saucepan. If all of it won’t fit, stop when the saucepan is about 3/4 full. Put the saucepan over medium heat and reduce the Coke by simmering it, adding any additional coke once some of the water has boiled away. (Reducing the Coke will take a while; mine took about an hour.) When you have approximately 3/4 cup of liquid remaining, carefully insert a candy thermometer into the saucepan.

When your cake is cool, assemble it by putting one layer on your serving dish. Level the top of the cake and spread the can of cherry filling over the top. Put the other layer on top and level it. Frost the cake. The frosting will deflate a bit as you work with it; this is normal.

You can reserve the pieces of cake left over from leveling the layers and use them as a cake topping.

Coca-Cola® and Coke® are registered trademarks of The Coca-Cola Company.

Copyright © 2013 - 2017 by David Fisco. All rights reserved worldwide. Requests for licensing and distribution can be emailed to David Fisco.