This very simple vegan cake can be used in a wide array of applications. Not a vegan or vegetarian? Don’t worry: the coconut, applesauce and vanilla provide a flavor that anyone can enjoy. 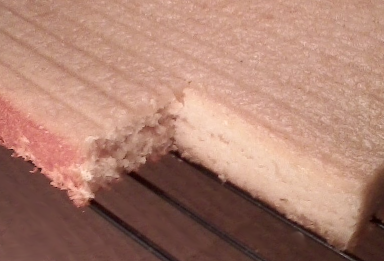 Sift three cups of all-purpose flour into the bowl of a stand mixer fitted with a paddle attachment. Add a tablespoon of baking powder. Using the lowest setting on the mixer, mix these ingredients for one minute. Turn off the mixer and add one cup of canola oil. Turn the mixer to its lowest setting and mix the flour and canola oil until all of the flour is incorporated in the oil. Turn mixer off.

Pour the batter into the prepared baking pan. Rap the pan on the counter several times to be sure the batter is evenly distributed in the pan. Bake at 350 degrees Fahrenheit for 25-29 minutes, until a toothpick inserted in the center comes out clean. Remove from the oven and allow it to cool in the pan for ten minutes. Remove from the pan and cool, top side up, to room temperature on a rack.

Has this recipe helped you with a vegan or vegetarian lifestyle? You can discuss it below.