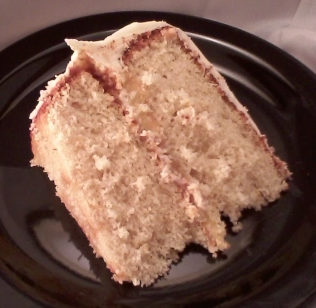 Heat your oven to 350 degrees Fahrenheit. Grease or spray two 9"x3" round baking pans. Set the pans aside.

In the bowl of a stand mixer fitted with the paddle attachment, add your sifted flour and baking powder. Using a mortar and pestle, grind the anise seeds into a powder and add to the mixer's bowl. Stir on low speed for at least one minute, until these ingredients are combined.

Place a microplane grater over the bowl of your mixer and grate the zest of the orange directly into the bowl. Be careful to remove only the zest and not the pith. Return the bowl to the mixer and on lowest speed, stir until the oiled flour and zest are combined.

Combine the milk, kosher salt and rose water and stir until the salt is dissolved. Pour this mixture into the mixer's bowl. Add the minimally-processed sugar to the bowl and turn the mixer to its lowest setting to begin mixing. When combined, add the eggs, one at a time, until combined. Stop the mixer and use a spatula to scrape down the sides and bottom of the bowl, making sure all of the ingredients are combined. Once you are sure everything is mixed, turn the mixer to medium speed and beat the batter for 3 minutes.

Divide the batter evenly between the baking pans and bake in the 350 degree oven for 29 to 33 minutes, until a toothpick inserted in the center comes out clean. Remove from the oven and allow the pans to cool for 10 minutes. After 10 minutes, remove the cake layers and allow them to cool, top up, to room temperature.

While your cake is cooling, you can make the filling and icing.

Construct a bain-marie with a sturdy saucepan full of water and a metal bowl that fits on top of the saucepan. Bring the water to a boil.

In the metal bowl, whisk together the egg yolks, minimally-processed sugar, orange juice and pinch of salt. Place the metal bowl over the boiling water and whisk until the mixture becomes thick, about 8 minutes.

Remove from the boiling water and whisk in the butter, one tablespoon at a time until all of the butter is melted and incorporated.

Refrigerate for one hour.

In a mixing bowl or a stand mixer's bowl, combine all of the ingredients. Beat with an electric hand or stand mixer on medium speed until smooth and creamy. If your icing is too stiff, you can add milk, a drop at a time, to thin it; if it is too thin, and confectioners' sugar, a spoonful at a time, to thicken it. Don't refrigerate this icing before frosting the cake as the frosting may become too thick to spread.

When your cake is completely cooled, fill and ice the cake. Store it in the refrigerator.