Soft and rich, this cake provides all the flavors of a Mai Tai: the fruit, the almonds and rose water, and the rum. 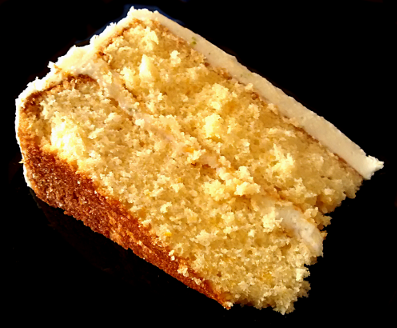 Fit your mixer with the paddle attachment. Combine the sifted flour and baking powder in the mixer’s bowl. Turn the mixer on at its lowest setting and allow the ingredients to mix for 2 or 3 minutes.

Place a Microplane grater over the mixer’s bowl and remove the zest of an orange into the bowl.

In a small bowl, combine the orange juice, salt, almond extract and rose water. Stir until the salt is dissolved. Pour into the mixer’s bowl. Add the rum and minimally-processed sugar to the bowl and beat on low speed until thoroughly incorporated. Scrape the sides and bottom of the bowl if necessary.

Add the four egg yolks to the bowl and beat on low speed until thoroughly incorporated. Scrape again, if necessary.

Turn the mixer up to medium speed and allow it to beat for three minutes.

Divide the batter evenly between your pans and bake for 29-33 minutes, or until a toothpick inserted in the center comes out clean.

In a mixing bowl, combine the powdered sugar and cream cheese. Place a Microplane grater over the bowl and remove the zest of two limes into the bowl. Filter one tablespoon of the lime juice and place it in the bowl.

Using an electric mixer, beat the ingredients until smooth.