This cake offers a strawberry flavor augmented by the champagne acids. It has a moist crumb with a silky, vanilla and almond ermine (roux) icing. 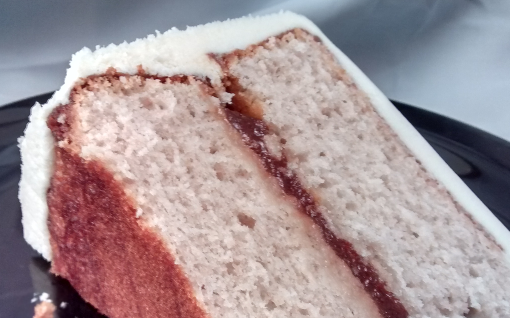 Wash the strawberries, remove their tops and cut each into quarters. Place in a non-reactive bowl, toss with .25 cup (48 grams) of the sugar, cover and store in the refrigerator overnight.

The next day, pour the strawberries and all juice into a sturdy saucepan. Add the water and a pinch of salt. Put over medium heat and bring to a boil. Reduce the heat and simmer, covered, for 30 minutes.

When finished simmering, carefully pour the liquid through a fine-mesh seive into a heat-proof measuring cup. Use the back of a spoon to drain all liquid out of the berries and into the cup. If your berries produced less that a cup of juice, add water to make one cup. If your berries produced more than a cup, clean your saucepan, pour the juice into the saucepan and simmer it down to one cup. Set the juice aside to cool.

Fit your mixer with the paddle attachment. Combine the sifted cake flour and baking soda in the mixer’s bowl. Turn the mixer on at its lowest setting and allow the ingredients to mix for 3 minutes.

Add the egg yolks and stir until combined with the flour and canola oil.

In a small bowl, combine the strawberry juice, salt, tartaric acid, lactic acid and rose water. Stir until the acids are completely dissolved. (This may take over a minute of stirring.)

On low speed, alternate mixing the strawberry juice mixture and the remaining 1.75 cups (336 grams) of sugar into the batter.

When all of the liquid and sugar is incorporated, turn off the mixer and scrape the bottom and sides of the mixing bowl to make sure everything is mixed. Turn the mixer up to medium speed and allow it to beat for three minutes.

Divide the batter evenly between your pans and bake for 28-33 minutes, or until a toothpick inserted in the center comes out clean.

Put the flour and milk in a sturdy saucepan. Using a fork or hand whisk, whisk over medium heat until it thickens to a pudding-like consistency. It should be pulling away from the sides and bottom of the saucepan when it is cooked. Remove from heat, place it in a heat-proof container and allow it to cool to room temperature (you can use the refrigerator to speed this up). When cool, stir in the vanilla and almond extract.

Using an electric mixer, cream the butter and sugar for 8 minutes. It must be light, fluffy and not grainy.

Reduce the mixer to lowest speed and beat for 5 minutes. This will deflate the frosting to make it easier to spread.

Copyright © 2016 - 2017 by David Fisco. All rights reserved worldwide. Requests for licensing and distribution can be emailed to David Fisco.