Here are all of the flavors of a piña colada in a light and fluffy cake. Unlike many rum cakes, the liquor in this cake isn’t overpowering. 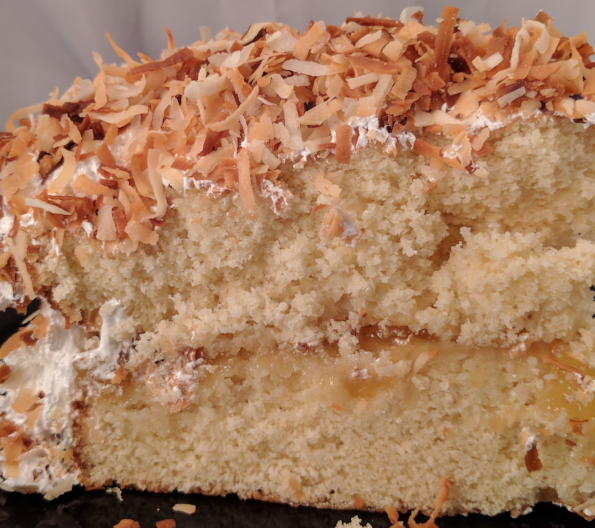 Fit your mixer with the paddle attachment. Combine the sifted flour, baking powder and salt in the mixer’s bowl. Turn the mixer on at its lowest setting and allow the ingredients to mix for 3 minutes.

Add the melted coconut oil and allow it to combine with the flour on the mixer’s lowest setting. Continue until the oil has coated all of the flour. Add the eggs, one at a time, mixing throughly after each addition.

Combine the vanilla, pineapple juice and coconut milk in a container and mix. Alternate adding this liquid and the sugar into the bowl, in thirds, mixing thoroughly after each addition.

Turn the mixer up to medium speed and beat the batter for three minutes. Divide the batter evenly between the prepared pans. Bake for approximately 26-28 minutes, until a toothpick inserted in the center of the cake comes out clean.

Cool in the pan on a wire rack for 10 minutes. Remove the layers from the pan, and the parchment from the bottoms, and cool (tops up) to room temperature on a wire rack.

When the layers are cool, use a fork to poke holes in the tops of each layer. Carefully pour 2 tablespoons of the rum into the small holes of one layer, pouring slowly to allow the rum to sink evenly into the layer. Repeat with another 2 tablespoons of rum on the other layer.

Heat the oven to 325 degrees Fahrenheit. Spread the coconut evenly over a baking sheet and put the coconut in the oven. Every few minutes, use a fork to rearrange the coconut on the tray. Continue doing this until the coconut is toasted: tan to light brown, but not burned. Remove from oven and set aside to cool.

In a small saucepan, combine the sugar and water and fit the saucepan with a candy thermometer. Place on the stove, but do not begin heating yet.

Turn the heat under the saucepan to medium-high. Cook the mixture until it reaches 240 degrees Fahrenheit. Turn the mixer to high and slowly incorporated the sugar syrup in a thin stream into the egg whites, being careful not to get any on the whisk. If you cannot do this, you can alternate turning the mixer off, pouring in a small amount of the sugar syrup, then turning the mixer up to high to incorporate completely and repeating the process until all of the sugar syrup is incorporated. Leave the mixer on high, and continue to whip until the outside of the bowl is warm, but not hot to the touch. Add the kirsch and continue whipping a few minutes longer, until close to room temperature.

Using a pastry brush, coat the outside of the cake with the two tablespoons of rum. Cut small strips of paper or foil and slip them under the sides of the cake, to prevent any icing from getting on your serving plate. Then evenly cover the top and sides with the icing, using all of the icing. Coat the outside of the cake with the toasted coconut. You will need to be careful doing this on the sides. One way is to gently tip the cake while pushing handfuls of the coconut into the icing. The icing is very sticky and will hold the coconut. (You might want to use a latex glove to minimize the mess.) Remove the strips protecting the cake plate.

Store in the refrigerator, but bring slices to room temperature before serving.

Copyright © 2017 by David Fisco. All rights reserved worldwide. Requests for licensing and distribution can be emailed to David Fisco.